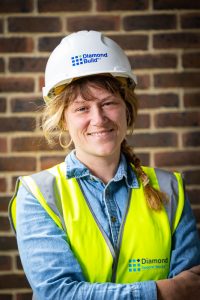 “I’m 40 and finally found a job that I really love.” Kate Heddy explains how an opportunity at Diamond Build Group propelled her into site management and a complete career change.

Working on a construction site was never on the radar for Kate Heddy. With a keen interest in psychology and the way people work, she originally wanted to find a role in mental health.

After taking time out to raise her family, Kate worked in variety of roles before deciding to step back into full-time employment six years ago. After a management role at a farmers’ market, she began working in studio management for a housebuilder.

“I gained an understanding of programming and would go to site to see it all being implemented, helping me to learn how all the processes linked together,” Kate explains. “I’d never understood what the role of a site manager was before then.”

After being made redundant during the pandemic, Kate was offered a temping role in administrative support at a large construction firm. The documents produced by the site managers sparked her interest and the potential for a new job opportunity.

“The more I learnt about site management, the more I realised that I had transferable skills and this was a role I could really enjoy. As someone with a logical mind, who likes answers, I knew my personality would also be a good fit.”

She continued: “But as a woman with no trades background, I also recognised that it would be a hard path to follow as most people in this field have been in the industry for many years.”

To get a foot on the ladder and more experience of working on site, Kate applied for resident liaison officer roles and was offered an opportunity with Diamond Build Group.

“Diamond Build Group took a chance on me, which I’ll forever be grateful for,” Kate recalls. “I began working alongside the project manager for a new development and told him from the outset that I wanted to get into management.”

She continued: “He let me shadow him and really get to grips with what was happening on site. He also tolerated my never-ending questions and wanting to run before I could walk – a keenness that meant I was given the freedom to learn so much on that job.”

Kate spent a year in this role and with the support of Diamond Build Group, undertook five training courses along the way to help build her skills, including an NVQ Level 4 in Construction Site Supervision. After finishing the project, she began working on the £8m transformation of Homefield School involving a large expansion, and was responsible for overseeing the health and safety on site.

“I felt completely out of my depth when I first started the job at Homefield School,” Kate admits. “This was a role that involved far more than just paperwork. I had to help drive the final phase of the project and it took me around six weeks to get my head around everything.

She continues: “At times, I felt like I was too late for the game, but my manager gave me the push I needed to learn and build my knowledge. I’ve now been given the demolition part of the project to manage and have far more confidence.”

Looking to the future, Kate is hoping to complete an NVQ Level 6 in Site Management and to continue to learn through experience and mentoring.

She says: “NVQs are a wonderful gift to people like me who are practical learners. I also think it’s really important to get site experience from the outset. This helps you to gain an understanding of the nuances of site work and the skills needed, and to see how other people work and the challenges they help to overcome.

“I’m 40 and have finally found a job I love. So, I’d like to continue this path, for as long as it’s there for me and to keep learning with the support of Diamond Build Group.”